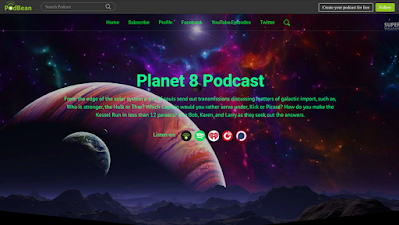 WE'VE MOVED!!
All new episodes (from #110 on) are over at Podbean (https://planet8.podbean.com/). On our homepage, you can click on new episodes and listen from there, or find us in your podcast ap - we're on Podbean, Spotify, PlayerFM, iHeart radio, Podchaser, and more. This site will continue to exist as an archive of old episodes and comments. Thanks to all you listeners for your support!
Larry, Bob, and Karen
at November 18, 2022 No comments: 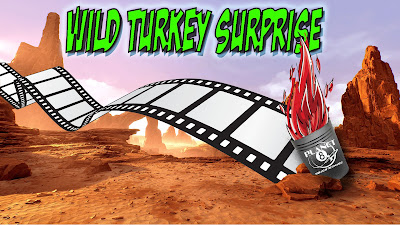 It's November, and here in the States, that means we're getting ready for Turkey Day! But on Planet 8, with our love of all things sci fi, fantasy, and horror, we have a love of a different kind of turkey: those films that many, especially those in the mainstream, consider to be bad films. And truth be told, a lot of these films might not be the greatest films. The production values might be poor, or the acting might not be spectacular, but for us, for the fans, we find something about them that we enjoy.

Your Planet 8 crew will take turns discussing some of our favorite turkeys. We'll cover films from far and wide, including Japanese monster films, a Star Trek movie (which one could it be??), several super-hero films, and of course, the requisite B-movie monster flicks. It's a nice mix of genres, as well as films from the 60s to recent years. Some of these films we consider misjudged, while others may indeed be turkeys, but we love 'em just the same! 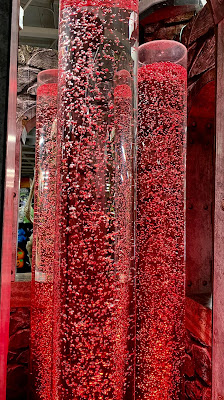 For our Sensor Sweep, Chief Engineer Bob describes his amazing Spirit Halloween store score, four six-foot tall bubble tubes! He snagged these after Halloween, and now has added them to his monster garage, tiki bar, and Creature from the Black Lagoon corner! It's some great bling.

Listeners, we have an announcement. We have found a new home for the podcast on Podbean. After four years now of podcasting, we realized we needed a dedicated podcasting platform to host the show. All of our episodes after this episode will only appear on Podbean. This site will remain, with all of our old episodes. But new episodes will only appear at https://planet8.podbean.com/ . Please be sure to check out the new site, bookmark it, or get the Podbean ap and add us. We will still appear on other podcast aps, as well as our YouTube site: https://www.youtube.com/Planet8podcast

Thanks once again for tuning in to the show! We appreciate your support. We'd love to hear about your favorite turkeys. Share yours with us at our social sites: 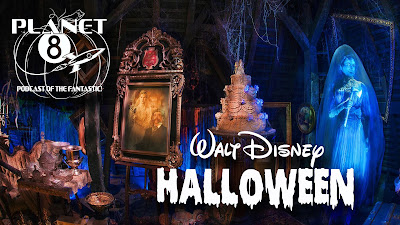 In this Halloween episode, we take a look at the scary animation, films, and park attractions of Walt Disney. Typically we think of Walt Disney features as being funny  family-fare, but there were quite a few memorable frightening moments or characters in Disney features. We're fortunate to be joined by the hosts of the Walt Disney Family Museum official podcast, Bri Bertolaccini and Chris Mullens, who share a ton of amazing stories and details with us! So get comfy as we take you on a tour of Disney frights, from the Skeleton Dance to Pinocchio, from Sleeping Beauty's Maleficent to Dr. Syn, all the way to Disneyland's famed Haunted Mansion. You'll be covered in goose bumps when we're done!

You'll also be itching to visit the Walt Disney Family Museum! Our two guests Bri and Chris not only host the WD-FM podcast, they are also part of the team at the museum too. So for the Sensor Sweep, they share what's going on at the museum, which is located at the Presidio in San Francisco. Currently, the museum is featuring a special program, Walt Disney's The Jungle Book: Making a Masterpiece (link) through January 8, 2023. Coming soon is Spirit of the Season, a community art exhibition (link) opening November 17th which runs through the holiday season. And don't forget to tune into the Walt Disney Family Museum official podcast, where you can hear more from Chris and Bri on a range of Disney-related topics! You can find WD-FM on most podcast aps, at https://www.waltdisney.org/podcast, or at their YouTube channel, https://www.youtube.com/c/WDFMuseum. 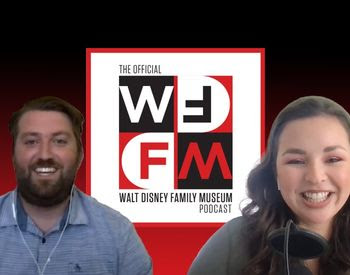 That's it for us. We hope you enjoyed this special Halloween episode. Please share your thoughts with us at any of our social outlets below: 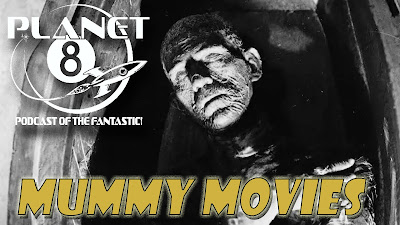 Here on Planet 8 we've dug deep into the lore of many creatures of the night. But this episode is the first time we've tackled that Egyptian menace, the Mummy! The Mummy arose from the popularity of the exploration/plundering of Egyptian tombs, especially King Tutankhamun. The discovery of King Tut's tomb was also associated with a curse, which fueled many imaginations and stories. The idea of a curse, or at the very least vengeance visited upon those who violated the tomb, became the basis for Universal's The Mummy in 1932, as well as most of the mummy films that have followed.

Your intrepid Planet 8 crew will take a journey through the history of mummy films, from the Universal films to the Hammer series, some independent films and TV productions, and then back around to more modern times with the mummy revival in the 90s with the Brendan Fraser films, and finally, the nail in the sarcophagus, the Tom Cruise film in 2017.

The Mummy is a unique monster and there's a lot to appreciate in this genre of films. We hope you enjoy this trip and share your feelings too! We'd also like to point out that Karen was a guest on our friend Billy D's Magazine and Monsters podcast back in May, where they discussed the Hammer 1959 film in detail. Here's the link, please give it a listen! 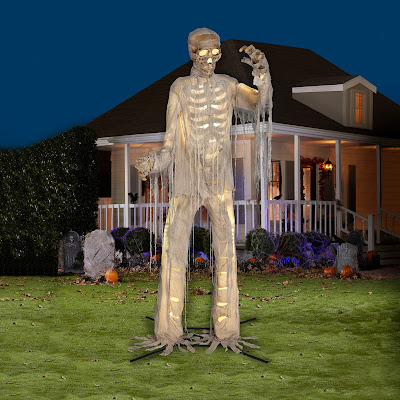 For our Sensor Sweep, we actually manage to stay on topic. Chief Engineer Bob and Mission Commander Larry discuss the joys of owning a 12 foot tall, animated mummy from Lowe's! It may be hard to acquire one of these now, since they have all been replaced by Christmas decorations.

That's all this time! We hope you crazy kids are getting ready for Halloween! We'll see you in two weeks for our Halloween show! 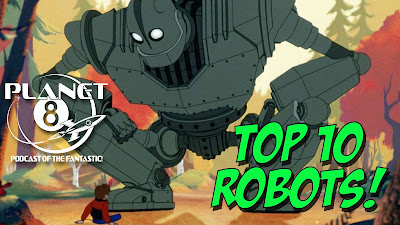 It's time for another Planet 8 Top Ten -only this time, it's a Top Ten times two! That's right, in this episode, we're giving you not one Top Ten list, but two Top Ten lists! And our subject this time around is near and dear to our hearts, and we hope to yours too: Robots! Sometimes friends, sometimes foes, these mechanical beings have always fascinated people. In this episode the Planet 8 crew shares their favorite robots, with a twist: we have one top ten list of giant robots, and a second top ten list of human or nearly human-sized robots! We hope you'll enjoy the lists and the discussion around the selections. We think some of them will surprise you! 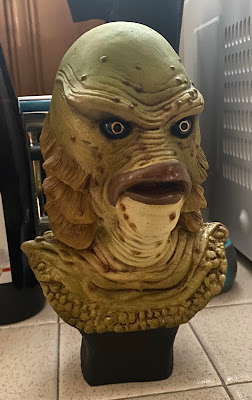 For our Sensor Sweep, decidedly non-robot related, is a limited edition Creature from the Black Lagoon 1/3 scale bust sculpted by Jeff Wehenkel and painted by Michael Reagan. Bob was lucky enough to get one at Creatures-Con recently. Sorry folks - no links for these! They're all gone!

That's all for this time. Let us know what robots are in your top ten! 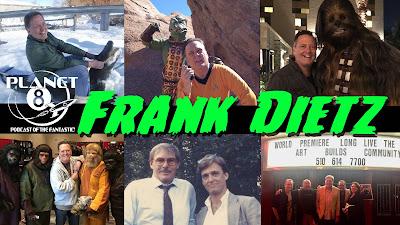 This episode our guest is Frank Dietz, who has had an amazing career in show business as a screenwriter, Disney animator, actor, and more. Frank shares his experiences in Hollywood with us. Frank is a wonderful storyteller. Sit back and enjoy!

For our Sensor Sweep, we shine a light on Frank's web presence. His web site, Sketchythingsart.com, is where you can find his art, screenwriting, and other work, as well as a calendar of his events. He can also be found on social media - Twitter and Instagram - at TheFrankDietz.

You can always reach Planet 8 at one of our many outposts below:

Episode 104: The Most Dangerous Prey 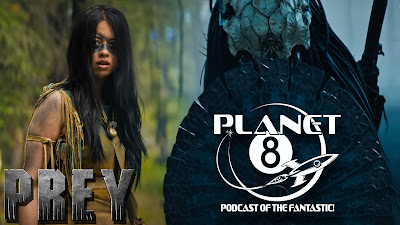 In this episode your Planet 8 crew will discuss and review the newest entry in the Predator film franchise, Prey!  Prey was released on Hulu this month and did not have a theatrical release. It is set in 1719 and pits a predator against a young Comanche woman. It's a thematic departure from more recent efforts in the Predator series and a breath of fresh air. We'll talk about what we liked, what we didn't like, and how it compares to the original Predator -the only yardstick that truly matters. 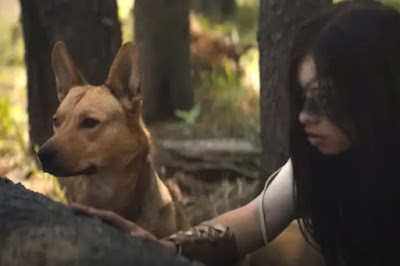 Oh, and in case you wondered -the dog doesn't die! 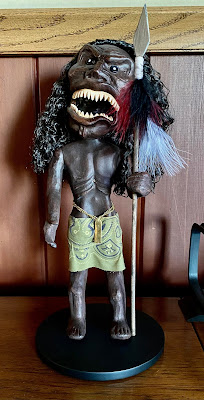 Now on to the Sensor Sweep: this time Chief Engineer Bob has a double header: He scored this fantastic Zuni Warrior from the infamous Trilogy of Terror TV movie at Creatures-Con, and then got this Shin Godzilla that lights up while he was hosting Godzillafest a week later. Talk about lucky! 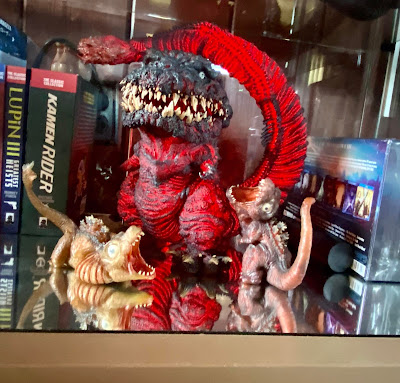 What did you think of Prey? Be sure to let us know via one of our communications channels: 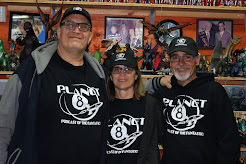